Methods : We used a laboratory prototype of high speed Swept Source OCT operating at 1050 nm for long-range imaging designed for full anterior segment visualization. The instrument itself and the processing parameters were optimized to enhance the image quality of the crystalline lens. Volumetric data consisted on 50 B-scans of 1900 A-scans each covering an area of 8×8 mm2. The anterior segment of both eyes in two age grouped subjects (young group, N=10, age range 13 to 44, mean 32; older adult group N=12, age range 62 to 91, mean 72 years old) was imaged. Within the older adult group, 8 subjects had visual complaints related to cataracts and were clinically graded according to the Lens Opacification Classification System III (LOCS III). The location in the meridional plane, the depth and the size of the structures visible in some of the crystalline lenses were studied.

Results : In the images of the crystalline lenses in the young group, the nucleus and several layers of the cortex were clearly visible. When the clinical examination revealed some opacity (nonzero LOCS III punctuation) in the cortex, structures were visible in the OCT images. Similar structures were also visible in some eyes of the older adult group that did not have any visual complains. In 8 of the 22 crystalline lenses imaged in the older adult group, hyperreflective structures were visible between two layers on both the anterior and posterior cortex. With respect to the pupil plane, this hyperreflective structures were crescent-shaped and tended to accumulate on the lower part starting in the vertical meridian between 1 and 1.5 mm away from the center of the pupil. Hyporeflective localized defects were visible in 4 lenses in the older adult group in either the anterior or the posterior cortex. These defects, whose size was about 1 mm wide, 200 μm deep, created shadows that blocked the pass of the OCT light.

Conclusions : Our swept-source OCT instrument permits to acquire 3-D information of the crystalline lens in vivo that reveals the position and size of the opacifications. This may allow a more detailed study of the age-related changes of the lens leading to clinically significant cataracts. 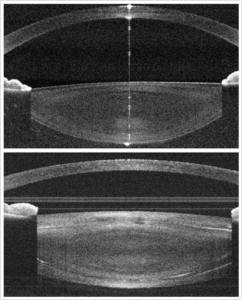